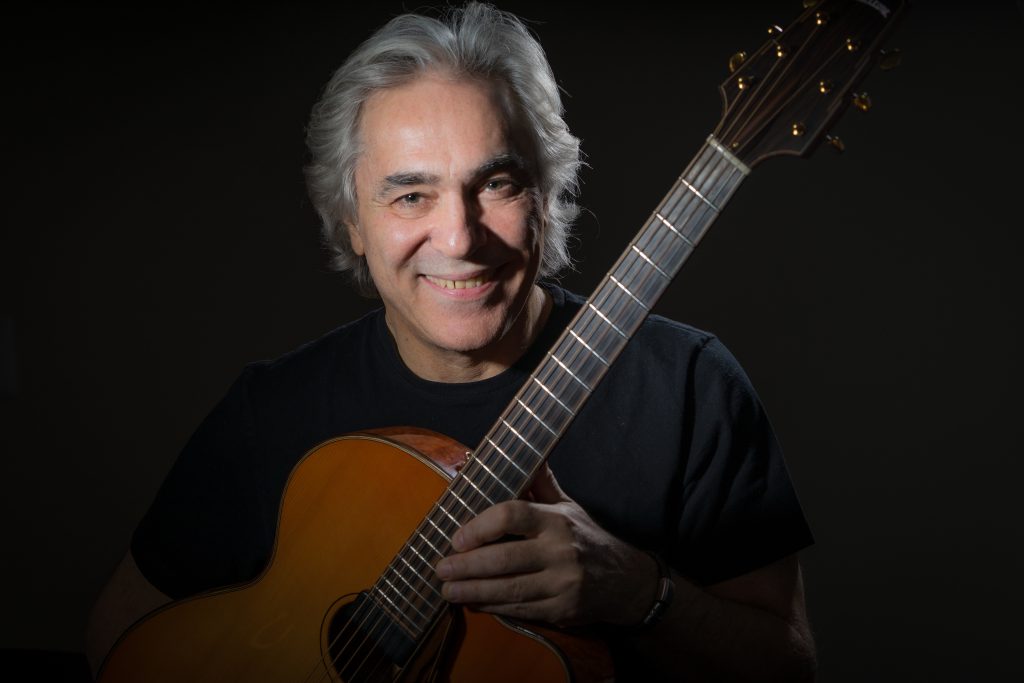 Among guitarists and critics, Woody Mann is considered a modern master. While the country blues are his touchstone, he seems to draw inspiration from every direction, blending a myriad of influences with ease and grace. Pioneering guitar legend John Fahey said it well: “You can hear classical, jazz and blues approaches somehow converging into a single sparkling sound – a sound completely his own. If there was a category simply called great music Woody’s music would belong there”.

Since his early days when Woody took his first musical schooling with Reverend Gary Davis, the legendary blues, gospel and ragtime guitarist and with Chicago-born jazz pianist Lennie Tristano, Mann has pursued a rich and diverse career. From his first solo recording “Stairwell Serenade” that Guitar Player Magazine included in their “guitar recordings of destiny” he has; performed everywhere from the orchestra pits of Broadway to stages worldwide, recorded extensively as a soloist and in collaboration with legends Son House Bukka White, and John Fahey, been honored by the C.F. Martin guitar company with the release of “Woody Mann” signature model, named as the official USA ambassador the Great Britain International Guitar Festival, and has schooled countless guitarists through his many books and DVDs. Mann’s latest release “Careless Love” features a collection or original tracks ranging from Italian inspired melodies to Southern blues and jazz rhythms.

Acknowledging his artistry, the C.F. Martin guitar company has honored Woody with the release of the “Woody Mann” signature model guitar. He is also the official USA ambassador the Great Britain International Guitar Festival, where he has been a frequent performer.

Woody has taught at the major guitar workshops in the USA and Europe including Hanover University in Germany and Jorma Kaukonen’s Fur Peace Ranch, been a faculty member at the New School in New York City, founded International Guitar Seminars, and created his own innovative online teaching website. Presently, Woody is a visiting artist at Berklee College of Music in Boston, MA, where he is teaching a new generation of musicians.

Throughout his career, Woody has not forgotten those early lessons in the Rev. Davis’ living room or the jazz traditions that were his wellspring. He has become one of the world’s renowned guitar masters – bringing the past up to the present – with his own contemporary improvisational style.

“This is one of those names that should be uttered only in hushed tones. Not only was he taught by the peerless guitar picker the Rev Gary Davis, but Mann has played with Son House, Bukka White and John Fahey and has studied jazz under the great Lennie Tristano. In between he has also managed to cut some dazzling music, both by himself and in collaboration with performers such as Jo-Ann Kelly and bluesman John Cehpas. Don’t miss a chance to see him; you are unlikely to hear anything- or anyone – better in the fields that Mann has chosen to master.”
– The Times ( London)

“… Mann blurs the line between jazz, blues, classical, and world music creating his own sound in the process. Attempts to categorize his music simply miss the point. This is brilliant playing that demands to be heard.” –Sing Out Magazine

"Mann has absorbed so many guitar styles that he can change moods on a dime, weaving lyrical single string lines and chord harmonies that can take his tunes across the musical divides between genres” – Acoustic Guitar Magazine

“Woody takes familiar material and twists and turns it taking a phrase and dynamics into a breathtaking listening experience. And smooth & bluesy vocals.” – the Guardian

“What is remarkable is how he can draw from several styles and techniques within a single song and have them blend without the feeling of inconsistency. Woody Mann’s performance is inspired from start to finish.”-Acoustic Musician Magazine